Friends, dudes, countrymen, and lovers of all things edible, I bestow upon you this gift:

If there’s one way I like to take my veggies, it’s with cheese, please.

I also don’t like my fried zucchini with too much zucchini. Crazy Person Translation: I don’t want any thick pieces of mush to gnaw through. I mean, come on. I don’t want to know I’m eating veggies. I like to be tricked.

That’s why I was interested in this recipe, because the pieces of zucchini are cut nice and thin (about 1/4 inch).

I have to admit that I had a bit of a…how shall I say… crazy fiasco getting the recipe just to my liking. They don’t call me The Kitchen Snob for nothin’, ya know. But some of the trouble had to do with getting my stove-top temp just right. A bomb went off in my kitchen but – yippie ki-yay – I came up with this recipe! I learned a little bit about using different oils, too.

Yeah um [looks around embarrassed] they should look much lighter in color like this: And how about putting them in cute little cups (preferably more decorative than these plain white ones) so guests can eat them easily. Golly, I’m so dang crafty sometimes that I’m sure Martha Stewart has got her eye on me as a fierce competitor. The tricks of the fried zucchini trade: You could add any seasonings you like to the flour. For example, add some cayenne pepper to make them spicy if you’re crazy adventurous like that.

Onward, cooking soldiers. Make these zippy Zucchini Parmesan Crisps and report back to me. 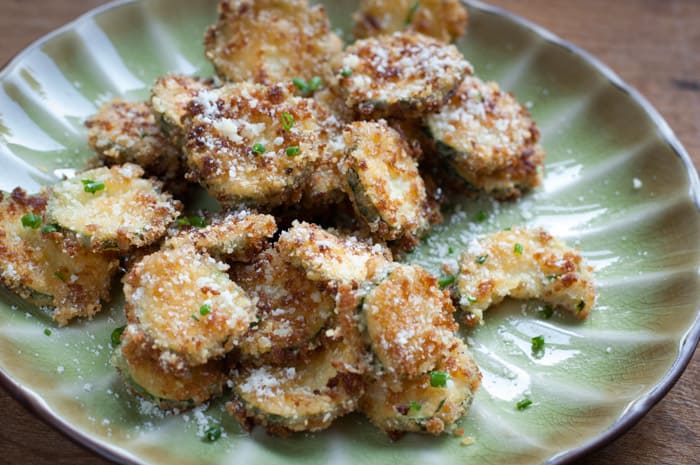 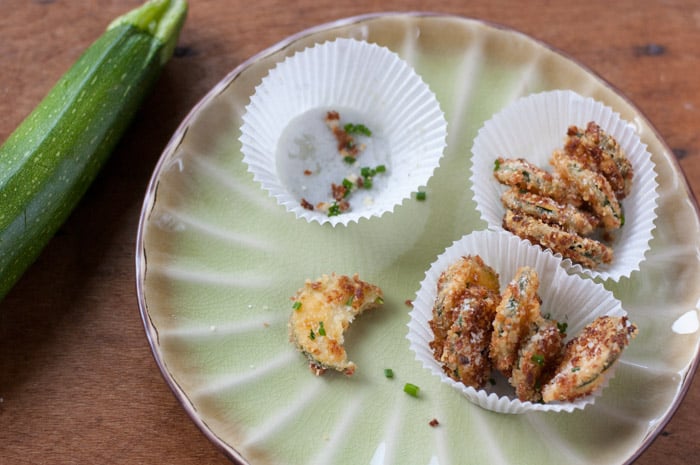